Timothy Ellis Hotham
Posted by Dear President Trump at 10:27 AM 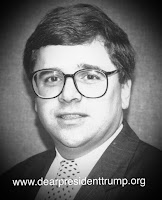